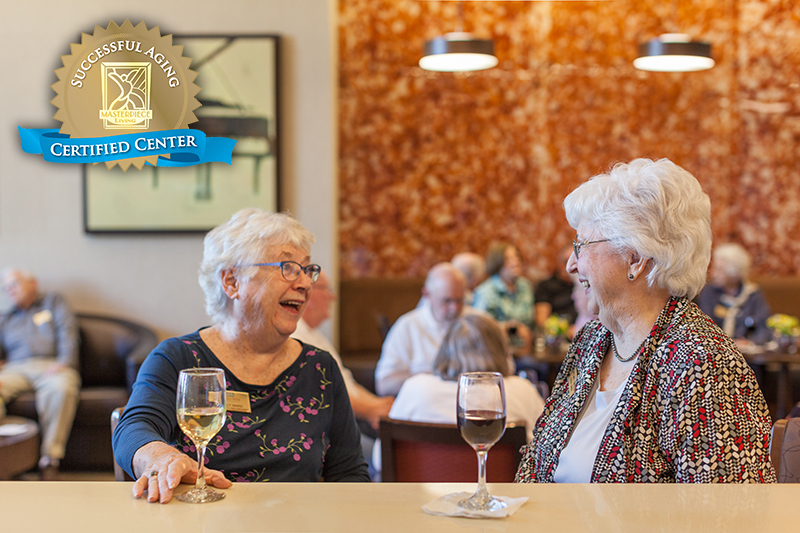 At Acacia Creek’s founding, its board members set out to create a different kind of retirement community. One that would unite Masons and non-Masons alike in a shared culture of respect, community, and enthusiasm for life. One where the desire to “age successfully” – to establish continued growth and learning as an integral part of the aging process – would be a distinguishing factor.

Now, six years young, Union City, California’s best-kept secret is out. The nonprofit continuing care retirement community (CCRC) has achieved an unprecedented victory: Masterpiece Living just designated Acacia Creek as a “Certified Center for Successful Aging.” Based on qualifications determined in a landmark 10-year study by the MacArthur Foundation, this prestigious distinction has only been awarded to 15 other CCRCs in the United States. And, Acacia Creek’s application is unique in that it not only met but exceeded Masterpiece Living’s gold-caliber standards. Very few communities have ever scored above 90 on the evaluation; Acacia Creek’s score was 95, the highest to date.

This announcement follows closely on the heels of two other major landmarks: In 2016, the campus reached 100 percent resident occupancy. A master waitlist was introduced, to accommodate climbing interest. And, the campus recently received its permanent Certificate of Authority from the California Department of Social Services.

The main reason for Acacia Creek’s success and appeal is its residents and culture. The community’s resident-driven lifestyle involves residents in every aspect of campus life, from selecting (and teaching) courses to setting menus, planning celebrations, initiating volunteer efforts, and more. As resident Karen Moody aptly puts it, “I don’t want to spend my retirement just sitting around. That’s why I’m here at Acacia Creek.”

Another unique factor continues to be the Masonic values upon which the community was founded. They effuse through everyday life – from Acacia Creek’s joint events with the Masonic Home at Union City, which shares its campus, to its democratic resident council and pervasive spirit of generosity. Nine men have become Masons since moving to Acacia Creek.

“These achievements reflect the vitality and engagement that is the culture of Acacia Creek,” says Acacia Creek President Chuck Major. “They are the result of the partnership between residents and team members in creating a community where all residents age happily and successfully.”